Today, Dr. Samy Fawzy, Archbishop of the Episcopal/Anglican Province of Alexandria, met Raed Tashtoush, the Seafarers’ Service Officer in the Jordanian city of Aqaba, where he congratulated Archbishop Samy on assuming his position. The dialogue took place between them on the latest developments in the seafarers’ service in Egypt, which takes place in partnership with the Episcopal/Anglican churches in Port Said, Alexandria, and Suez.

The sailors’ service began in 1836 by the Reverend John Ashley and in 1856 the service sent their first chaplains to the Middle East in 1886 when four young men arrived at the flourishing ports of Larnaca, Aden, Port Said, and Basra.

The service seeks to meet the needs of all seafarers and their families regardless of creed or cultural background and its mission is simply to take care of the most important component of maritime navigation, the people working at sea. The service operates in 200 ports and 50 countries around the world. 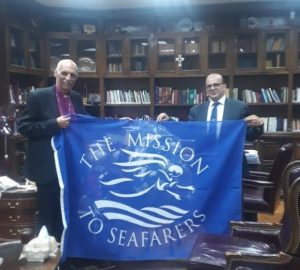 On his first day after taking office…

The Archbishop of the Episcopal/Anglican receives the delegation of the Evangelical Church: a good gesture that opens the door for dialogue between us