Harpur Memorial Hospital in Menouf – affiliated to the Episcopal/ Anglican Church – continues to receive citizens as part of the 100 million health campaign, which is the initiative of the President of the Republic to examine and treat chronic diseases, for the next three months.

It is worth noting that Dr. Mouneerr Hanna Anis, Archbishop of the Church, had been working as director of the hospital beginning in 1970, and he assumed his work in extremely difficult circumstances, as the Ramad Menouf Hospital (governmental) occupied a large part of the hospital buildings, as well as the hospital, was suffering from a severe financial deficit and persistently Unusual, and with the encouragement of some officials at the time, Dr. Mouneer began implementing an ambitious plan to modernize the hospital and provide specialized medical service of a distinguished level.

Due to the narrow space of the outpatient building and the increase in the number of patients to about 180 thousand patients annually, in 2019 AD, the expansion of new buildings on an area of ​​1500 meters was carried out at a cost of about 50 million EGP, and this expansion aims to raise the efficiency of the medical service provided to patients and accommodate these large numbers 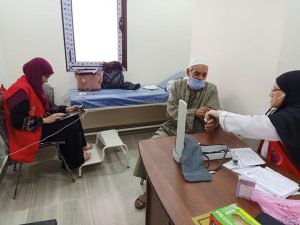 The Episcopal/Anglican church: We are on the way to the judiciary to regain our right as an independent Church

The Episcocare resumes work in nurseries with precautionary measures against Corona