Representatives of the presidency, the interior, and Al-Azhar in the audience

Commitment to the precautionary measures and prayers for Egypt

Bishop Mouneer said in the sermon: While the whole world is pervaded by a feeling of anxiety and fear of the spread of the pandemic and the emergence of new strains of the virus, the birth of Christ illuminates the darkness, adding: There is no doubt that the world around us is groaning because of our loved ones who have lost them and because of the social distancing between families and friends, the deterioration of the economy and unemployment.

The bishop asked: Is it appropriate to celebrate the birth of Christ in the midst of all these events? Adding: I have thought a lot about this matter and found that the birth of Christ is connected with light, and the light illuminates the darkness and gives hope to those who walk in darkness, whether this darkness is due to harsh circumstances or because of our sins.

And the bishop considered: Celebrating the birth of Christ helps us realize that despite all difficult circumstances, there is a loving and merciful God who is able to give us peace and joy in the midst of all the circumstances that try to rob us of our peace and push us into sadness and depression,

Hanna continued: When we read the birth story as it appeared in the Gospels, we find these different positions on the birth of Christ.

The bishop pointed out that the Virgin Mary, when the angel announced to her that she would conceive and give birth to a son, and his name would be called Jesus because he would save his people from their sins, believed and accepted the command of God and said, “Behold, I am the servant of the Lord.” She believed and therefore rejoiced at the salvation of Christ for her. As for the shepherds, the Archbishop said about them: When the angel preached to them the birth of Christ, they overcame the feelings of fear and set out to see the child born in Bethlehem, and when they met the child, Jesus who was lying in a manger, they returned glorifying God and praising him over all What they heard and saw, that is, they also experienced joy because they saw the Messiah the people were waiting for and believed in him.

Hanna continued: As for the Magi who were longing to see the great king who saw his star in the sky and realized that this king would change the course of history. This longing prompted them to travel great distances from the countries of the East or Persia until they came to Jerusalem, adding: They asked Herod the king about the location of the newborn king, and when they did not find him, they continued their search until they reached Bethlehem and found Jesus in a despicable place and believed that this child was lying In a manger is the great king who came to worship him and worship him. Saint Matthew says that they rejoiced with great joy. And they presented him gifts of gold, frankincense, and myrrh, and these gifts symbolized the fact that Christ was king and priest and that he would pass through death.

Hanna pointed out that Herod when he heard the birth of Christ felt threatened and was troubled because he feared his throne and plans to get rid of Christ was born, he said to the wise men who came to ask about a child born, ” 8 And he sent them to Bethlehem, and said, Go and search diligently for the young child; and when ye have found him, bring me word again, that I may come and worship him also. (Matthew 2: 8) And when the Magi did not return to inform him of the place of Christ’s birth, he sent and killed all the children from two years old and under. Here we see that Herod was filled with fear and committed the most heinous crimes because he did not accept Christ as a King and Savior

While the bishop drew attention to the attitude of the Jewish priests towards the birth, he said: We are looking at the position of the Jewish chief priests, as they knew exactly where the Messiah would be born because they knew very well all the prophecies that were written in the Torah, but they did not wait for him because their knowledge was historical knowledge that did not move their hearts. With the news of Christmas, they did not try to go to Bethlehem to investigate the matter and meet the Messiah that everyone is waiting for.

He addressed his message to the Christians, saying: My dear, these different situations are repeated today. There are those who believe and long to meet Christ, and this is filled with joy and hope even in the darkness of this world,

And he continued: And there are those who reject Christ and feel threatened when they are spoken of, like Herod, and such people live and die in evil and sin, and there are those who know well about Christ, but this historical knowledge is not accompanied by faith and a yearning to meet Christ, and these people become spiritually blind and are unable to see the truth as the Jewish chief priests.

Hanna concluded his speech: The question before us now is: What is your position on Christ, do you yearn to meet him in your life, or do you reject him, or do you not care about him? St. John says, ” 12 But as many as received him, to them gave he power to become the sons of God, even to them that believe on his name:13 Which were born, not of blood, nor of the will of the flesh, nor of the will of man, but of God..” (John 1: 12-13)

While Bishop Mounir said: We pray for Egypt. We have lived through building megaprojects. The state takes special care of the right to housing and builds thousands of apartments every day in addition to various initiatives aimed at raising the Egyptian human being, such as 100 million healths.

The bishop expressed his thanks to President El-Sisi and to the Egyptian government which is leading in the prosperity and is building huge achievements, for which we thank God. 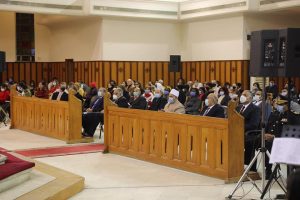 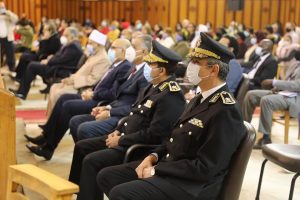 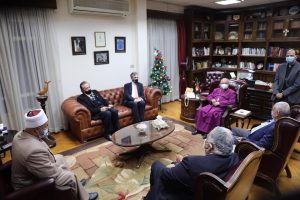 Archbishop: The birth of Christ illuminates the world amid the bereavement of Corona and the pain of loss