Dr. Mouneer Hanna, Archbishop of the Episcopal/Anglican Church, presides over the prayers of the inauguration service of Archbishop Samy Fawzy as a new bishop of the church at All Saints Episcopal/Anglican Cathedral in Zamalek, where the inauguration ceremony witnessed the reading of the oath of obedience by the new bishop and then sitting on his throne in the cathedral.

After receiving the staff of the patronage and knocking on the doors of the cathedral, Archbishop Samy came to the altar, kneeling in silence to pray for the former metropolitans.

As part of the inauguration rites, the Archdeacon, Emad Basilios, the head of the Council of Priests, read the oath of obedience to him, saying: Bishop Sami, the priests, and laypeople of the Episcopal/ Anglican Church in the Diocese of Egypt promise you to support and prayers.

Then the people of the church stood up, then Bishop Mouneer started the new bishop and seated him on his throne in the cathedral, saying:

“Based on the authority vested in me in the Cathedral of All Saints, I appoint you to the seat of the honored Archbishop in this cathedral and entrust you with the possession of all the actual, real, and practical rights of the episcopate of this church and the rights, dignities, privileges, and benefits it contains, and your entry from now and forever. Amen.”

At the end of the ritual, the new Archbishop Samy Fawzy exchanged peace with the people of the Church and those present to begin his service as Archbishop of the Province of Alexandria for the Episcopal/Anglican Church.

Yesterday, the Episcopal Church honored Archbishop Mouneer Hanna and his wife after a 21-year service as Archbishop and another 21 years as a doctor and director of the Church’s Menouf Hospital, provided that Archbishop Samy Fawzy, under this announcement, will serve the church as Archbishop of the Province of Alexandria for the coming period. 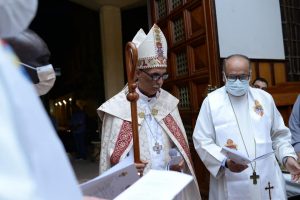 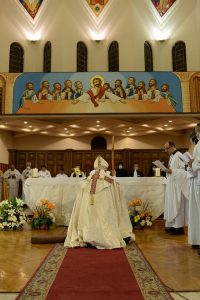 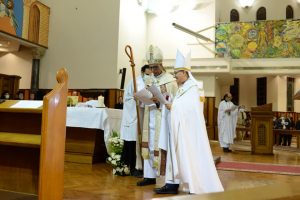 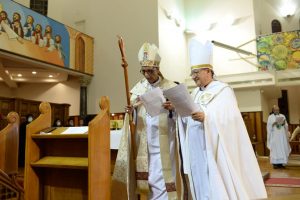 Today.. The Episcopal/Anglican Church prepares for the inauguration of a new Archbishop