The inauguration service began with readings from the Bible, and then the bishop of the Episcopal/Anglican Church came to meet the elected bishop and presented him to the archbishop, saying: Dear Father, Samy Fawzy, to you to be appointed Metropolitan in the Church of God

Bishop Mouneer Hanna addressed his speech to the people of the Church, saying:

Those who have the power to choose have chosen the supreme that has a life of piety and knowledge to become a bishop in God’s church. Is it your will now that he consecrates and appoints a Bishop and Archbishop of Alexandria? He added: Do you support him in his service? The people of the Church answered: Yes, we will.

On his behalf, Bishop Mouneer Hanna read the announcement of acceptance of the inauguration of Bishop Samy, saying:

The Episcopal/Anglican Church is part of the One, Holy, Catholic, and Apostolic Church that worships the one true God, the Father, the Son, and the Holy Spirit. It recognizes the one faith proclaimed in the Holy Bible and proclaimed in the Creed. It is the faith that the Church is called to proclaim to all generations. These churches are led by the Holy Spirit. It bears witness to the Christian truth and proclaims it in all its historical rites and teachings, in the Book of Common Prayer, and in the ranks of bishops, priests, and deacons.”

Bishop Mouneer added: In the statement that you will announce now, do you affirm your loyalty to this inherited faith, as God’s guidance suggests to you in seeking grace and Christ’s right to this generation? And the revelation of Christ to those in your care? ”

While the elected bishop replied:

“I exalt, profess, and affirm my belief in the Christian doctrine revealed in the scriptures, follow the creed of the Catholic and Apostolic Church which the Episcopal/Anglican Church attests in all its historical rites, and follow public prayer and practice the sacraments. I will use only legally authorized systems of service.”

Yesterday, the Episcopal/Anglican Church honored Archbishop Mouneer Hanna and his wife after a 21-year service as bishop and another 21 years as a doctor and director of the Church’s Menouf Hospital, provided that Archbishop Samy Fawzy, under this announcement, will serve the church as Archbishop of the Province of Alexandria for the coming period. 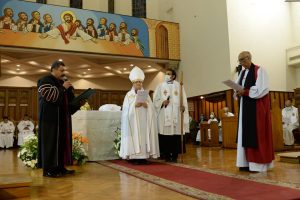 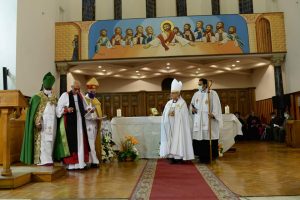 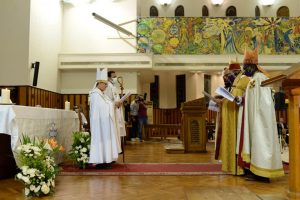 Archbishop Mouneer Hanna: The hand of God led me to walk above the waves despite the troubles