At a ceremony honoring the old members…

Archbishop: The servant’s fruits and prayers appear among the community of believers

Today, Dr. Mouneer Hanna, Archbishop of the Episcopal/Anglican Province of Alexandria, honored the old members of the church’s servants who spent more than 20 years in service.

Bishop Hanna spoke in his speech, saying: The believer’s fruits and his prayers appear in the center of the Church of Christ, and like Paul, the Apostle spoke to the Corinthians, “As for you, you are the body of Christ.” Paul speaks here to the members of the body who make up the group of believers. And the various pastries and all believers from all over the world to be one body in Christ.

Bishop Hanna added: The members of the body differ in form and function as well as the believers, but they are united together by faith. It is natural that we differ in our identity and form, but we share in the body of Christ, as John said, “But all are one.”

And he continued: God prayed to Peter, who was different from John. He prayed to them for their unity, even if they were different. The unity for which Jesus prayed is the unity of purpose and not the unity of form.

Archbishop Hanna pointed to the importance of what the Episcopal Church in Egypt offers, saying: Through our nature as a church that combines tradition and the thought of reform, we are a church that can build bridges through our identity with the traditional churches and the reformed churches in Egypt, by belonging to our churches without losing our identity. It is necessary to be part of the church we cherish and trust unity and adhere to identity.

Archbishop Hanna concluded the ceremony honoring the members by presenting them with souvenirs and sending them a message saying: I would like to thank all the church members who spent more than 20 years inside the Episcopal/Anglican Church for their endurance, patience, and service throughout this period and their belonging. It is not enough to say thank you for all your efforts and will not be sufficient but if it were not for the help of the Lord, you would not have given all this love.

At the end of the ceremony, Counselor Fouad Roushdy was installed as a lay Canon (an honorary rank granted to the servant in return for his efforts within the church), In the diocese of the Episcopal/Anglican Church in Egypt, after making a lot of effort and love for the Episcopal/Anglican Church and assisting him in all his legal advice and drafting the constitution of the diocese and the region. 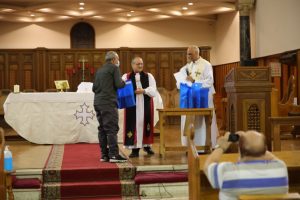 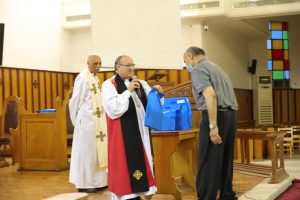 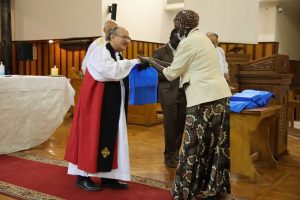 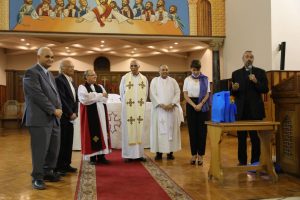 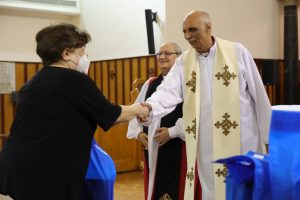 The Archbishop appoints the legal advisor to the church, “Lay Canon”