Dr. Samy Fawzy, Archbishop of the Episcopal/Anglican Province of Alexandria, congratulated Dr. Shawky Allam, Mufti of the Republic, on the occasion of the approaching Eid al-Adha, at the head of an ecclesiastical delegation at the headquarters of the Egyptian Dar al-Ifta

Bishop Samy said: We congratulate you on the blessed Eid Al-Adha, and we hope that the joint cooperation between us will continue

The Mufti expressed his desire to continue cooperation with the Episcopal/Anglican Church in the coming period, adding: Our meetings with the Egyptian churches reveal the nature of Egypt.

The Mufti stressed: I did not see the intolerant and extremist tone in the countryside where I was raised, so I only heard about it late. President Sisi played a major role in defeating such matters, noting: The Egyptian experience has a profound impact on the fusion between Muslims and Christians

The Mufti indicated that the President of the Republic is keen to build new churches in all his projects, and we, as religious leaders, should take advantage of this atmosphere of love and cooperation. 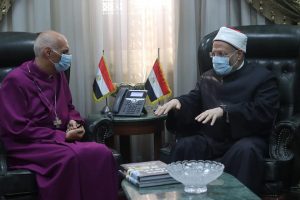 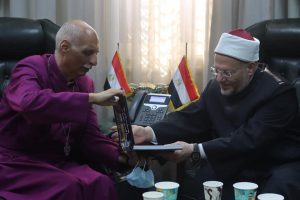 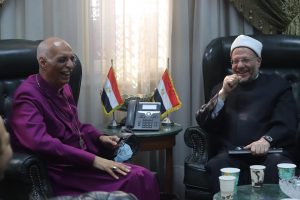 Archbishop of the Catholic Patriarch: We appreciate the development work of your church and its cultural role