Dr. Samy Fawzy, Archbishop of Episcopal/Anglican Province of Alexandria, congratulated Dr. Muhammad Mukhtar Gomaa, Minister of Endowments, on the occasion of the approaching Eid al-Adha, at the head of an ecclesiastical delegation at the Ministry’s headquarters.

Archbishop Samy said that President Sisi changed the life in Egypt for seven years, to the point that he made Christians feel safe as he was keen to congratulate them on holidays, adding: He created a huge renaissance in the economic and health field.

Archbishop Samy praised the efforts of the Minister of Awqaf in advocating citizenship and confronting extremist discourses in society, stressing the importance of the ministry’s role in spreading moderate Islam.

On his behalf, the Minister of Endowments said that Egypt is known for its tolerance, whether due to the nature of its people or it is a mixture of different civilizations, stressing: As the Ministry of Endowments, we communicate with all Egyptian churches and also outside Egypt with the aim of joint national and humanitarian action.

The minister called on the Episcopal/Anglican Church to participate in the ministry’s conference, saying: Our next conference bears the slogan “The Citizenship Contract,” because it represents the modern solution to peaceful coexistence. The Egyptian experience is unique and worthy of being studied, and I said that at the United Nations headquarters in Geneva.

And the minister continued: When people talk about citizenship, they only mention religious tolerance, while we need to accept diversity within the same religion and give women their rights as part of citizenship. Also, ethnic diversity is included in citizenship, which means rights and duties between the citizen and the state.

At the end of the meeting, the minister presented books from the ministry’s publications to the delegation of the Episcopal Church, while the Archbishop presented him with a book “Beacon of Hope,” which monitors church services over twenty years.

The meeting was attended by Reverend Yashua Bekhit, Assistant Dean of the Cathedral, Rev. Michael Milad, patron of the Dialogue Committee, Mr. Selim Wassef, Counselor of Christian-Islamic Dialogue in the Episcopal/Anglican Church, and Dr. Noah Abdel Halim Al-Isawy, Head of the Central Administration for Affairs of the Office of the Minister of Endowments. 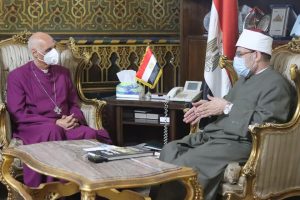 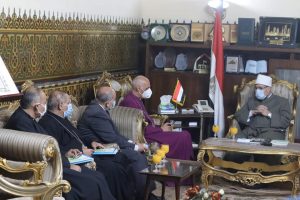 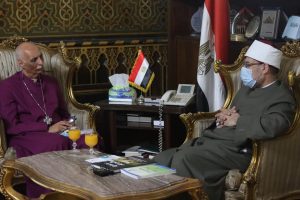 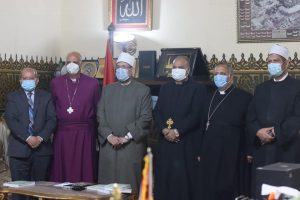