Dr. Samy Fawzy, Archbishop of the Episcopal/Anglican Province of Alexandria, praised the decision of President Abdel Fattah El-Sisi to stop the emergency law after more than 40 years of working and extending it in Egypt.

The Archbishop said that the president’s decision confirms the stability of the country after it crossed a difficult juncture in its modern history, during which it was able to walk in the two tracks of fighting terrorism on the one hand and development, on the other hand, stressing that the decision constitutes a political breakthrough.

The Archbishop stressed that the decision to abolish the emergency state encourages foreign investment in Egypt and gives a glimmer of hope to the tourism sector, and then to the continuation of growth and economic reform programs

The Archbishop thanked the Egyptian state agencies for their strenuous efforts over the past years in combating terrorism until the day came when the emergency state was suspended. 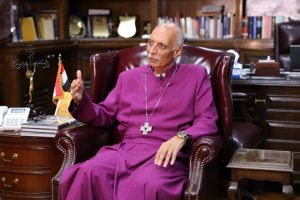