Archbishop Samy to the Catholic Archbishop of Minya: Spiritual and service work unites us

Dr. Samy Fawzy, Archbishop of the Episcopal/Anglican Province of Alexandria, visited today, Tuesday, Anba Basilius Fawzy, Catholic Bishop of Minya, at the Diocese headquarters, where a brotherly dialogue took place between them.

Archbishop Samy expressed his happiness for the cooperation and fraternal spirit that unites the Episcopal/Anglican Church and the Catholic Church in Egypt, stressing that the two churches are members together in the Council of Churches of Egypt and share many activities.

The Archbishop pointed to the active participation of the Catholic Church in the project together we develop Egypt, which is sponsored by the Episcopal/Anglican Church, wishing the continuation of the spirit of brotherhood between the two churches because all churches are members of the one body of Christ. 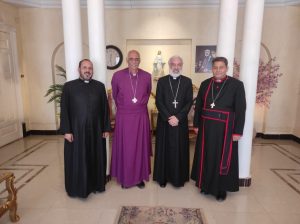 Archbishop on the July 23 Revolution: It will remain present in the conscience of the people with it’s achievements