Archbishop on the July 23 Revolution: It will remain present in the conscience of the people with it’s achievements

Dr. Samy Fawzy, Archbishop of the Episcopal/Anglican Province of  Alexandria, congratulates His Excellency President Abdel Fattah El-Sisi, the leaders of the army and police, and all the Egyptian people on the occasion of the celebration of the 69th anniversary of the glorious July 23 Revolution.

The Archbishop said: The July 23 Revolution will always be present in the conscience of the Egyptian people with its great achievements in establishing principles of social justice.

The Archbishop added: The July 23 revolution constituted a turning point in Egyptian history and established the Republic, which played prominent roles in confronting the British occupation and restoring national dignity.

The Archbishop continued: The July 23 Revolution demonstrated the keenness of the armed forces to protect the entire Egyptian people and achieve their aspirations.

The Archbishop concluded his congratulations by addressing his words to President El-Sisi: I pray to God that he will cover you with care and success, so that all the aspirations of the Egyptian people may be achieved by your hands.

And prove your steps in all the giant projects that you are undertaking, which aim at a decent life for all Egyptians. 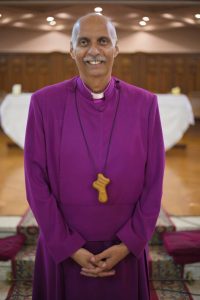 Archbishop Samy to the Catholic Archbishop of Minya: Spiritual and service work unites us