The Episcopal/Anglican Church in Egypt mourns Field Marshal Hussein Tantawy, the former Minister of Defense, who passed away this morning

The Archbishop extends his condolences to the Egyptian Armed Forces, his family, and all his fans, saying: We mourn a man of Egypt’s loyal men, Field Marshal Hussein Tantawi, who spent his life in the service of the country, raising the banners of the Egyptian Armed Forces, as he contributed to its progress and occupation of high positions globally throughout his years of service.

The Archbishop added: Field Marshal Tantawi led the country in a critical period after the revolution of January 25, 2011, to set a new example in wisdom, patriotism, and good management, stressing: The Egyptian military history will write the contributions and achievements of Field Marshal Tantawi in letters of light.

The Archbishop prays to God to have mercy on the deceased and to inspire his family, lovers, and students’ patience and solace. 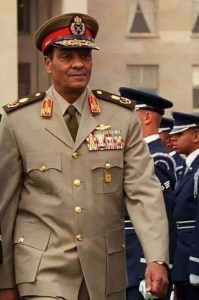 During the mass prayers at Mdinet el salam Church..

Archbishop presiding over Mass in October: Without Christ, we do not bear fruit in…