Archbishop inaugurating the Synod: “I pray that you will continue to build bridges with the community”

Dr. Mouneer Hanna, Archbishop of the Episcopal/Anglican Province of Alexandria, inaugurated the Synod of the Diocese of Egypt today, Wednesday

He said in the first sessions: I hope that you will preserve your unity, for the unity of the Church is the secret of its strength

He continued: And wait for the blessing from the God of heaven, and the Lord gives you the wisdom to encourage the people of the church after the pandemic period and provide care for the parish of Christ, adding: I pray that you will continue to build bridges with society and work to achieve national unity and sectarian harmony.

This comes after the Synod began today with the service of the Holy Communion and then the opening speech, in All Saints Cathedral in Zamalek.

The Archbishop added in his inaugural address: The motto of this Synod is “and he called his name the Stone of Help.” This slogan reminds us of the victory that God granted to his people when Samuel cried out to the Lord, and he responded to him and gave him the victory. That is why Samuel the prophet said, “Here the Lord helped us.”

The Archbishop expressed his thanks to all his fellow priests and directors of institutions in the diocese for all their efforts, adding: Without your dedication, we would not have seen the development that took place, as this is our first Synod after we became the province of Alexandria.

In his speech, the Archbishop spoke about the most prominent points that the Church has worked on in the past and since the last meeting of the Synod in 2019, which are: the transformation of the diocese into a province, the election of Archbishop Samy Fawzy as Deputy Archbishop Mouneer in April of 2020, and the projects carried out in partnership with various institutions, the activity of the media center and the extension of the diocese. 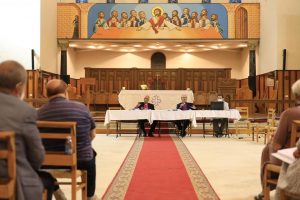 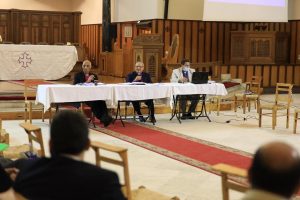 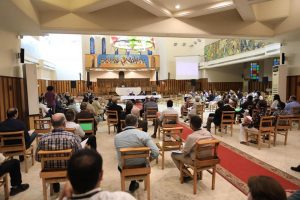 In cooperation with the National Council for Women