Dr. Mouneer Hanna Anis, Archbishop of the Province of Alexandria of the Episcopal/ Anglican Church honored Dr. Sherif Hanna, the Egyptian-Canadian consultant surgery who came to Egypt especially to spend seven years to volunteer to train doctors at Harpur Hospital affiliated to the Church, where the Church organized a ceremony honoring him in the presence of the Canadian Ambassador

Dr. Sherif said about his honor: I spent seven years serving Egypt and training and educating Egyptian doctors with international standards and training them in advanced surgical methods, adding: It is an honor for me to be honored by Archbishop Dr. Mouneer Hanna today.

Dr. Sherif continued: I performed more than 900 surgeries over the course of seven years, and it was a great challenge to come to Egypt in 2013 due to the political conditions that the country was going through, as it was living in a black cloud at the time of the Brotherhood, but with the support of my family I was able not only to perform surgeries but to achieve the ultimate goal of training Egyptian surgeons to perform thousands of operations.

Dr. Sherif concluded: It was a very special time in Egypt with the support and support of Dr. Mouneer Hanna, and Dr. Samir Rizkallah, Director of Harpur Memorial Hospital in Menouf.

On his behalf, Dr. Mouneer Hanna said in a farewell ceremony hosted by him yesterday that Dr. Sherif graduated from the Faculty of Medicine at Cairo University and then traveled to Canada to obtain the master’s and doctoral degrees in surgery until he decided to fulfill the call of his homeland and return to train Egyptian doctors and perform hundreds of surgeries for a period of 7 years Something that would not have happened without his wife’s support.

While Louis Dumas, the Canadian ambassador in Egypt, expressed his happiness with the service provided by Dr. Sherif in Egypt and his representation of Canada through the surgeries he performed and through training doctors during the seven years he spent in Egypt, stressing that Dr. Sherif is also the ambassador of Canada in Egypt.

The ambassador emphasized that the Egyptian people are warm and welcoming, and the honor of Dr. Sherif is the best proof of that. 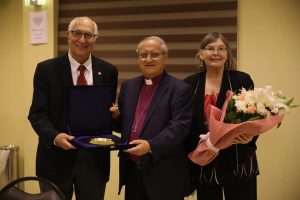 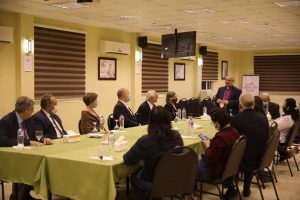 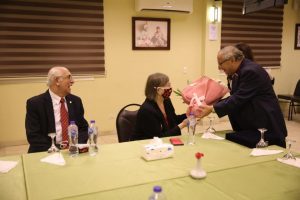