Today, the Cathedral of All Saints, the Arabic Section, organized a celebration of the Family Day with the ladies meeting of the Bulaq Center affiliated to the Episcopal Care Institution for Social Services (Episcocare).

Manal Mansi spoke about the woman, saying: How to be a source of peace in her home and her important role in building and raising children by leading the house wisely, caring for children physically, spiritually, and mentally, and instilling Christian faith in their hearts.

She added: Every mother and woman should choose the timings of being firm and relaxed with her children and realize the power of prayer to save her family. The ceremony was concluded with songs and gifts were distributed to the attendees.

It is worth noting that the Province of Alexandria of the Episcopal/Anglican Church is the 41st region of this church around the world and includes under its leadership 10 countries in Egypt and North Africa and is subject to the presidency of the Archbishop of Canterbury and follows the Union of Anglican Churches in the world, while the Evangelical community does not enjoy a global reach. 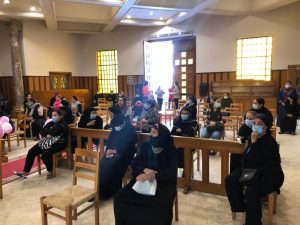 Egyptian Newspapers Praise the Capacity Building of the Deaf Unit