All Saints Cathedral in Zamalek

Tomorrow… the President of the “Episcopal/Anglican Church” inaugurates the conference of the Council of Anglican Provinces of Africa.

The Episcopal/Anglican Church in Egypt will host tomorrow, Tuesday, the opening of the Conference of Council of Anglican Provinces of Africa known as CAPA, where nearly 20 bishops and their wives, representing the countries of Egypt, Ghana, South Sudan, Kenya, and Burundi, will participate in the conference activities at All Saints in Zamalek.

On his behalf, Archbishop of The Episcopal/Anglican Province of Alexandria, Dr. Samy Fawzy, said that the conference hosts a large number of African bishops, especially the Nile Basin countries, and supports Egyptian-African relations and builds bridges of trust and mutual understanding on the grounds of love, brotherhood, and partnership, stressing that the sessions are training and exchange of experiences among the participants.

The Archbishop explained in an official statement that the conference program includes visits to many Egyptian, Pharaonic, Coptic and Islamic tourist attractions, with the aim of showing the civilized face of Egypt as an incubator of civilizations and religious diversity.

It is worth mentioning that the Episcopal/Anglican Province of Alexandria, headed by Dr. Samy Fawzy, includes ten African countries: Egypt, Libya, Tunisia, Algeria, Eritrea, Ethiopia, Djibouti, Somalia, Chad, and Mauritania. It is the 41st province of the Anglican Church in the world. 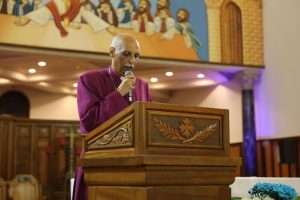 Archbishop Congratulating the Islamic New Year: We pray for the good and peace of our country

What I worship is what I become