A joint baptism between Catholics and Anglicans.

Emphasis on the unity of the Churches.

Dr. Mouneer Hanna Anis, Archbishop of the Province of Alexandria to the Episcopal Church in Egypt, completed the ritual of the baptism of his grandson, Youssef Shady, with the participation of Father Rafik Gerrish, priest of the Pope Kyrillos Roman Catholic Church in Heliopolis

The baptism that took place in the Church of St. Michael and all the angels in Heliopolis is a unique event in Egypt, as it took place with the participation of the two denominations the Anglican and the Catholic.

Bishop Mouneer Hanna said in a statement issued by the Episcopal/Anglican Church today: The Holy Bible urges us to preserve the unity of the Church and love between the different sects because they are members of the one body of Christ.

Hanna cited the verse that says: “One Lord, one faith, one baptism, one God and Father of all who is over all and through all and in all..” (Ephesians 4: 5-6) Adding: We must apply the teachings of the Bible

Hanna considered that the diversity of churches and their independence in the ecclesiastical, administrative, and liturgical systems does not prevent unity between them as they share one goal, which is to work for the glory of God and the name of Christ.

For his part, Father Rafik Greish, pastor of the Roman Catholic Church of Saint Cyril in Heliopolis, said: The ecclesiastical unity begins with signs of love and real partnership between the brothers, far from the superficial manifestations of unity.

Gerrish stressed: We are all members of the church even if our rituals differ, considering that participating in the baptismal prayer is a natural thing among those who love in the name of Christ.

It is worth noting that there is an ecumenical agreement signed by many churches confirming the common recognition of the baptisms that take place in these churches, and that took place in 1982 in Lima, Peru, under the auspices of the World Council of Churches, but some churches have not yet implemented this agreement. 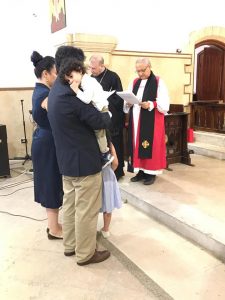 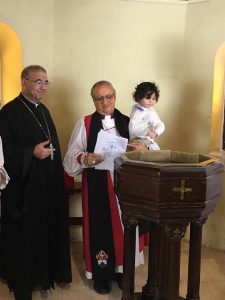 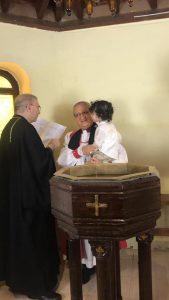 The Archbishop preaching over the English Service at Zamalek Cathedral.